Four Essays On The Obligation Of Veiling

These works include refutation of the evidences cited by scholars, who consider women veiling their face to be Mustahab (recommended) rather than Waajib (obligatory).

In addition to this, there are several appendixes with quotes from the scholars of past and present elucidating points raised in the treatises. 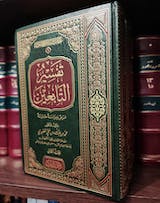